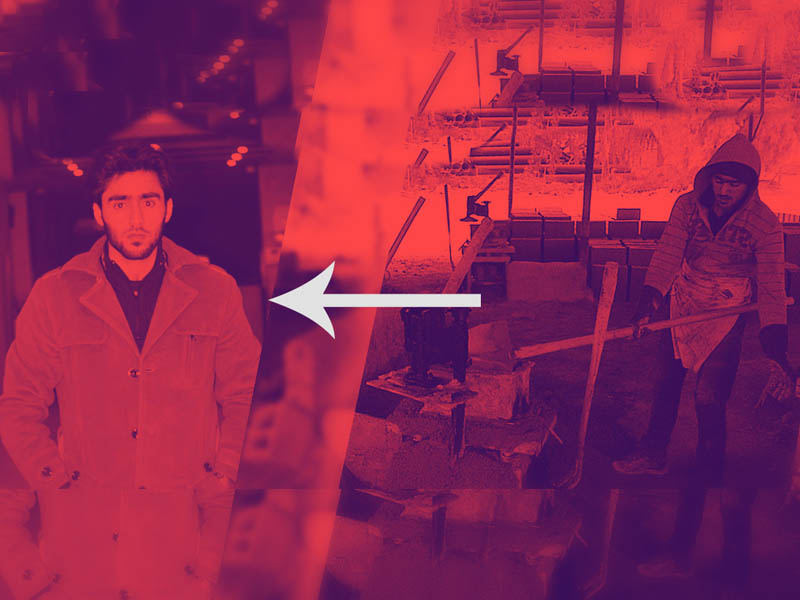 yes believe it or not! five months ago I was a constriction worker and now I am a full stack software engineer.

about 6 years ago the war became so brutal in my hometown, it made me suffer a lot, it took my father away, My Mom was worried about the rest of the family so we decided to go outside the country. that time I was a high school student, I was in the last year, and couldn’t stay in the country because I don’t wanna lose another one of my family.

we decided to go to Jordan for a few months until the war calms down on my village, and I still remember the bad time I had it on the border while I am carrying my books, haha, yes I was holding my books because I was planning to go back for the exam after some weeks, to complete my high school.

but when we came here to Jordan the life was too different, it is too expensive and I couldn’t stay at home to study, I needed to find a job, after searching I found a job in a farm in another city. one day after another the work was taking my life, and the war is still burning everything in my country.

I decided to apply for the high school here in Jordan because I believed that the war is not going to end soon, when I went to apply for the high school they just rejected me because I am Syrian, I must have the Syrian high school degree to be able to have the Jordanian high school! can you imagine? I tried for the next two years and it was the same result, I still remember that day when they rejected me for the third time I went Home trying my best to hold my Tears while I am watching my way to the education just got closed behind my eyes.

ok I will tell you the truth I didn’t like the school in my life, nevertheless I was the top one in my class but I don’t like it and I believed that it is not going to give me the type of knowledge I need, I believed in self-learning more than the schools way of Stuffing useless information inside my head.

that time I was working in a bakery, the work time was too long so I left that job and started working on hardest jobs you had ever seen as stone slicing and Bricks factory، the reason I did chose these hard jobs is that they have less working hours that allow me to go home and do the thing I love by learning computer related things.

I started with learning graphic design, motion graphics, 3d design, every time I was learning a new thing I would be so happy just like a kid who got a new toy, also, I really loved photography and the filmmaking so I worked really hard for about one year to buy my first camera it was the best day of my life.

one day a friend of mine realized my passion for computer and programs so he told me: why don’t you go to RBK? but what is RBK? it is a career accelerator for software engineering and it is just four months long, after that you can start your career as a software developer! I believed they will not accept me because I don’t have a high school degree! and my English not that great and I know nothing about programming! yes, I can use programs but I didn’t make one before! but ok what could I lose?

I applied on their website with one of my friends he was a college student but they didn’t accept him! so I got shocked when they invited me to an interview! I got fired from my job because I went to the interview! so I got some time to improve my English, so I was watching more than three movies every day and watching a lot of tutorials about programming and software development.

I went to the interview and when I entered their place (Hackers House) I felt so good watching a lot of young people who came from variant countries and all of them share the same passion for learning, I was really excited about it, and boom I got accepted to the program! after some days we started the camp, at the beginning it was so tough for me because a lot of my colleagues got graduated from universities, and I was one of the few who doesn’t have a degree!

but I still remember the word of the of RBK founder Hugh Bosely, he said once if you really focused on this program you will get the most out of it! and at the end of this camp, you will have great skills that the university cannot offer.

from that day you can not pass the lab without seeing me hacking, the first month it was really tough for me, there was a lot of pressure, and a lot of working hours.

the first challenge that I am not allowed to speak any language except English, and I must watch my soft skills so I needed to be super professional, although every day they pair you with someone who is exactly different than you, different culture, different personality, different gender, and different religion.

the material is designed to keep you lost all the time, even if you solved something quickly believe me that you solved it in a wrong way.

when I finished the boot camp I can tell you that RBK made a new Ahmad, I was enjoying every moment because I became more social, more patient, I became smarter, and became a real team worker, I learned a lot of skills that I can not get them outside of RBK, it changed my vision, my lifestyle, and my way of dealing with life, it gave me real friends I will never meet people like them outside RBK, I had a lot of moments that I can remember after 50 years.

moments were I laughed, smiled, learned, grew up, failed and succeed, moments were I got tired, exhausted, happy, angry, lost, feelings that I had and feelings I never had before.

and now ? I’m A new Ahmad with bigger dreams, bigger hopes, and bigger vision, I am now a lifetime learner, I can tell you that here I found myself and I am now a better human being.

this articles contains a lot of grammar issues, I wrote it long time ago, but a wise man told me not to fix grammars because one day I will be proud of them.

Build a better search in Vuepress

My journey with open-source just started

How to create a blog powered by Vuepress?